I get into the habit of beating myself up over my lack of regularity for posting here. You would think that it wouldn’t be a huge hairy deal. After all, blogging is a voluntary activity. No one forces a person to have a blog or contribute to it. There’s no rule that says I have to do anything at all.

Except the annoying EXPECTATION VOICE that lives in my head, of course.

That’s the voice that comes with a bag of pressurizers labeled, “Must Be Best At” and, “Can Not Make Mistakes With”. Not to mention the ever-popular, “Don’t Tell Anybody Anything, Lest You Fail Publicly”. That voice has been with me all my life. That voice accompanies every new thing I have ever tried, and everything I have done over time. For always. It is what kept me from ever (that I recall) raising my hand to ask a question in school. Ever.

That’s also the voice that has revved me up to learn enough to get by on almost any subject, so I guess it’s something of a motivator. 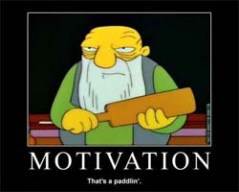 That amount of expectation and pressure also contribute to the amount of guilt and shame that accompany just about anything that I am not immediately awesome at or about doing.

For example, I had every intention of posting to this blog with regularity. I meant to keep up with amusing, not-too-personal anecdotes. I wanted so badly to narrate my own story, to have some control over what to prose of my current life would be. But I am lazy and stressed about what life is really like, and so don’t have the humor necessary to sustain the effort necessary to do what I intended.

Learning, at my somewhat advanced age, to allow myself some latitude in this area is incredibly difficult. I am not particularly well equipped to permit less than perfection. I am trying, but it’s so damned hard. Learning to forgive myself is also hard.

And I find that relearning higher algebra is also a fairly large pisser. And I am doing that*. So I can learn to allow myself some slack. Maybe. We’ll see.

(*Really. I am doing higher algebra so that my kid doesn’t feel so put-upon that I am making her review it this summer a) because her performance in that class was less than stellar this past year, and b) because she will need a good understanding of higher algebra to be successful in pre-calculus, which she insists she wants to take next year, rather than Functions, Statistics and Trigonometry, which I suspect might be the better option for her, given that she doesn’t seem inclined to become a research scientist or phyisicst. I mean, not everybody has to be Neil de Grasse Tyson.)

I am prone to speaking before having engaged my brain. This has caused some strife, and much laughter.
View all posts by elsmama →
This entry was posted in Deep Thoughts, Living wilth intent, Making it up as I go along, Parenting. Bookmark the permalink.